In our blog, you’ll find information about metaphysics and spirituality from Lazaris and Jach, excerpts from Lazaris recordings and interviews, travelogues from Jach’s adventures around the world, and Alisonn’s “Soul Writings.”

It wasn’t out of pity; it was out of admiration. It’s another long weekend in Colombia — un puente fin de semana — "a bridge weekend."

Friday we drove to Periera, a city in "el Eje Cafetero," the coffer growing area. It’s not a pretty city but it’s popular as a party town with a reputation. (What happens in Pereira …). With a population of about a million people, and many more tourists, it sits at edge of the middle range of the Andes Mountains. It shares the region with Armenia, Santa Rosa, Manizales, and Medellin. We are staying two blocks from the historical center, Plaza Bolivar. Friday evening, a gentle breeze rolling in from the mountains, a clear night, a night quietly bustling with locals, we walked the plaza and the adjoining streets.

Dinner around 10:30. A hotdog — perro caliente — purchased from a street vendor. Hotdog smothered in creamy slaw, melted cheese, slivered potato chips, and any number of sauces of our choosing. Big, messy, delicious. We sat on high plastic stools on the sidewalk. Eating. Watching the passebys. Lovely night. Pereira.

Saturday, we walked the same route, but oh my, it was so different. The side streets swollen with vendors and alive with throngs of Colombia tourists, a few street musicians, and here and there sad beggars and homeless people. All the stores were overflowing with shoppers. While popping in and out of stores, we managed to located two interesting restaurants and a night club that would have live music for the evening. Found a few shirts. Pereira is know for certain nefarious things, but it is also know for manufacturing clothes.

After lunch, along one of the less busy side streets, among the old men talking of politics, of the state of the world, of the state of their family, or of the past that has slipped way as that sat in the shade of buildings and of the occasional tree lining the walkway, I notice a young family: mother, father, young son. The father picked up a long needle between the toes of his left foot. With his right foot he steadied a tray of tiny colorful beads. Carefully, he guided the needle through the tiny holes and gathered up a short line of rainbow colors. Lifting his left foot high to let gravity do its work, he then moved his foot with needle still between his toes, and transferred the line of color to a tiny loom. With his right big toe, he held the loom steady and then used that same toe to move the bead in place. Tight. It was slow work. He was patient. He did all this meticulous work with his feet and toes because he had no arms. 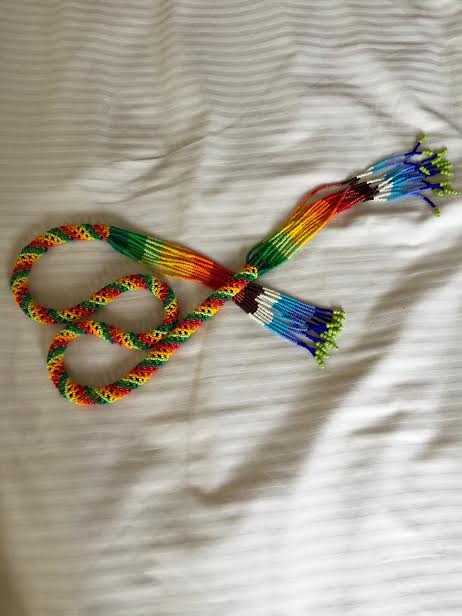 I bought the piece in the photo. It wasn’t out of pity; it was out of admiration. The human spirit. I marvel at it. I cherish it. It deserves to be cherished. Its persistence gives me hope.

When I remember the beauty and the power of the human spirit that can, at times, be undaunted by the rigors of life or in the face of manipulations by those who would attempt to take power away or those who demand to be in control, I embrace my spirit and find a renewed sense of determination. I can’t string beads with my toes, but I can be the magician that I am.