In our blog, you’ll find information about metaphysics and spirituality from Lazaris and Jach, excerpts from Lazaris recordings and interviews, travelogues from Jach’s adventures around the world, and Alisonn’s “Soul Writings.”

"That strange object you see there in the sky is the sun. Get a picture now. You may not see it again."

I left Colombia Monday afternoon (September 7) and with the overnight flight and a very long layover in Madrid, I arrived in Dublin Tuesday evening. Enrique and his mother flew in from Paris the next day as did my sister. My brother and his wife arrived early Thursday morning.

Thursday: By 10:00 a.m. we were on the top deck of the green line hop on hop off bus when the sun peeked through the otherwise gray sky. It was our first venture of our ten day tour of Southern Ireland. Dublin, Kilkenny, Waterford, Killarney, Ennis, and a whole lot of pubs in between: Foley’s, the Hairy Lemon, the Winding Stair (57 steps in all), Brody’s, Murphy’s, Monk’s Pub …. You get the idea.

Friday: It was our free day in Dublin, time to explore on our own. By 9:15 we were heading in our separate ways with plans to meet for lunch to share our mornings. Enrique and I headed to the National Library of Ireland to see a permanent exhibit of W. B. Yeats. It was amazing. Yeats, not only a brilliant poet, was a magician, a mapmaker, and a visionary. For example he had a powerful influence on the movement for Irish independence and upon the formulation of the newly independent country thereafter. He studied the magics of that time and lived a magician’s spirituality. Amazing. We meandered our way through the exhibit of photographs, documents, video recordings, and all the while there were recorded readings of his most renowned poems. "Easter 1916" (his struggle with the revolution that began on that day) was particularly stirring and chilling. Our morning tempered the rest of the day. Lunch at the Hairy Lemon, walking the city in the afternoon, dinner at the Winding Stair. Nightcap back at our hotel. A full day. A rich and mellow day.

Saturday to Thursday: Six days and nights and six of us in a 12-seater van. Dan was our driver/guide. We inched our way through the countryside avoiding the highways whenever we could. The Powerscourt Estate in Enniskerry, a magnificent garden, the Kerry Ring, the Dingle Ring, the Cliffs of Moher, and the Burren. Rolling hills, stone bordered pastures, lifting mountains, and countless shades of green that defied description. There may be 50 shades of gray, but there are even more shades of green. Breathtaking landscapes around each of the countless bends in the roads, roads that are more like trails. And the sun!! With a bit of weather magic we only had one rain-day and that was our stay in the van day.. Otherwise each gray morning turned bright and sunny, and the other mornings were vibrant with clear blue delight. Dan was amazed.

"It was a shocking summer," he had said, "it rained every day. Shocking summer." The entire week before it had rained and the forecast for our trip had also been rain. Did I say Ireland was green? With the rain, of course it is.

The beauty: So often there were no words. We would round a bend and the beauty was breathtaking. Literally. All I could do was take a deep breath so that the beauty didn’t take it away. Hour after hour, I loved it. So often we would be talking about some silly detail and then we’d all fall silent as the beauty captured us and held us in its embrace. The beauty is unique. I can’t find the words other than to call it Irish Beauty. Unique, yes, but bountiful.

I think my favorite place was the Cliffs of Moher. We left Killarney at 9:00 as the night drizzle subsided and as the fog was lowering. Dan, the driver, hurried us into the van. No time to waste. We had to get to the cliffs before the fog blanketed everything. As he pulled into the parking lot he told us not to waste time in the Visiter’s Center. We were to go immediately to the top and get our pictures. Then once the fog swallowed everything up we could check out the Center. We followed Dan’s instructions. 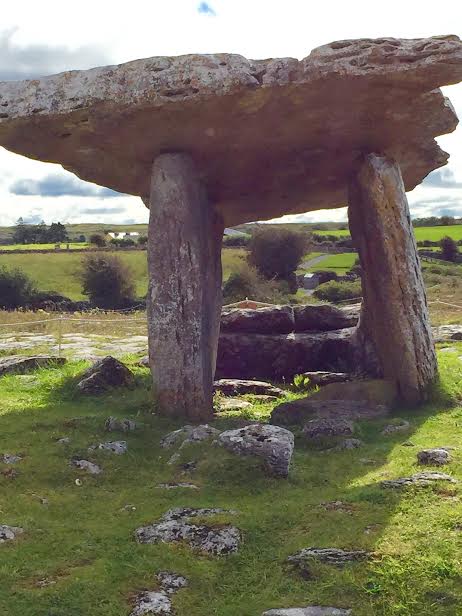 The cliffs, capped in rich pasture green still glistening from morning dew, lift from the Atlantic. 700 feet of naked rock. Majestic. Fierce. Standing for thousands of years against the sea that crashes against them mercilessly. The cliffs run for more than 5 miles. Rock and sea. Raw. Powerful. Yet there is a harmony. Their clash and crash is an eternal dance, and on that morning as the sun came out and the gray sky turned dazzling blue, we got to witness that dance. We got to stand still in the harmony. Silent. Us and the wind howling. Silent. Howling. Awesome.

Why do people always want to walk or climb to the top? We had done as Dan instructed. We followed the incline and we climbed the steps going higher and higher turning to view the cliffs at different heights. At the peak there was a stone tower. 13th Century. Our goal: reach the top and then climb that tower. We and all the other tourist seemed to be on a mission. Yes, see the Cliffs of Moher (pronounced "more"), and then climb that tower. Why?

Accomplishment? Completion? Not missing anything? Opportunity? I don’t know. I got to the top but I didn’t climb the spiral steps, but I had had the urge. Maybe putting the question stopped me. But I think it was the cliffs instead. I stood at the base of the tower and just look at the cliffs. That was enough. It was a special moment. A memorable one that I have planted in Cosmic Memory. In time I will retrieve it and unfold the gift that that moment holds for me.

Ireland was beautiful and magical. Being with my family was also beautiful, magical, and just lots of old fashioned fun. The Cliffs of Moher held the seed of Ireland for me. The other thing that stood out was the people. The sense of humor, the delight with life, the level of laughter, and the unselfish kindness shone through in so many ways. We asked a shop keeper for directions to a restaurant and he came out from behind the counter and out into the street with us and gave us detailed instructions. The sassy waitress in the pub was full of joy as she told us about her husband and kids and about how she had come to Ireland from Poland and has never looked back. Her Polish-Irish accent full of laughter and light.

The luck of the Irish. When we learned of their history and their struggle, I wondered where the "luck" was. But once I met the people, I found it. The luck is in their hearts and it shimmers in their souls.

We are home now in Colombia. Enrique’s mother went back to France before heading to Santa Barbara. My sister’s in Kansas, and brother and his wife are in Michigan. We each returned to our worlds, but Ireland will live on in our memories. For me, Ireland will be remembered in magical, beautiful and bountiful ways.